The day after this shoot I had a hangover. I was feeling sick with tiredness, aching all over, and my head refused to stop pounding despite downing quantities of ibuprofen and paracetamol. This was not alcohol induced, however, but instead had come about from eating way too much chocolate! 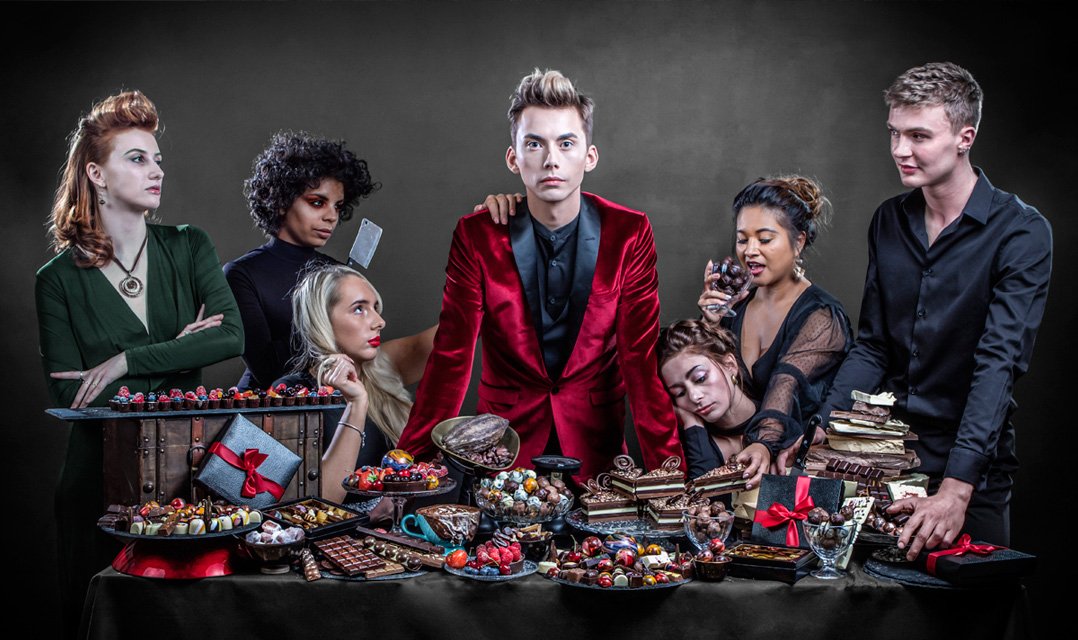 I know! Who thought such a thing was actually possible?

The previous day had been 18 months in the planning, starting when I met up with Gillian of In House Chocolates to discuss the creation of a set of promotional photos.

The 7 Deadly Sins was a theme she’d been toying with for a while, so over a large hot chocolate we began to explore what that might look like.

7 different models, each representing one of the sins (pride, envy, greed, lust, sloth, wrath and gluttony), each interacting with the chocolate according to his or her sin-nature, rounded off with a group shot of all 7 around a table piled with chocolate.

Pinterest boards were created to look at different ways of interpreting the themes and exploring different styles.

More meetings were had (with more hot chocolate consumed, obviously), and we decided that rather than go down a flamboyant Marie Antoinette route, or a top-hatted Willy Wonka style, we would go for something more modern and contemporary.

The styling of In House Chocolates is red and black, so the models wearing black, with accents of red throughout the images seemed like a good starting point.

Then there were thoughts about models, makeup and hair styling, so I turned to long-time collaborator on several projects, Ralph Yates-Lee of Basement 20 Hair Salon in Dumfries, and his first in command, stylist Trae Corbett, who also worked with us for the Moniaive Comic Festival shoot last year (See Dr Who and the Androids of Moniaive). In addition to sorting out hair and dress styles, they were able to find people to model for us.

Of course then we had to figure out where we were going to do the shoot. With 7 models, a team of hairdressers and makeup artists, plus me and Gillian, In House Chocolates itself wasn’t going to be big enough.

Ringford Village Hall leapt to mind as the ideal place. Easily accessible off the A75, it has toilets, a kitchen and plenty of space. I used it for my 50th birthday party, and my daughter Meg’s 21st.

We didn’t need a dramatic set. The focus was to be on the chocolate and the characters, but we would need some kind of neutral background – the hall itself wouldn’t really give the vibe we were looking for.

Earlier this year I did a set of actor’s head shots for Helen and Codge of the locally based Fox & Hound Theatre Company. While chatting with them about upcoming shoot for Gillian, they said they could supply a set of 8-foot by 4-foot black-painted boards. Perfect!

All that was left was to fix a date that everyone could manage. 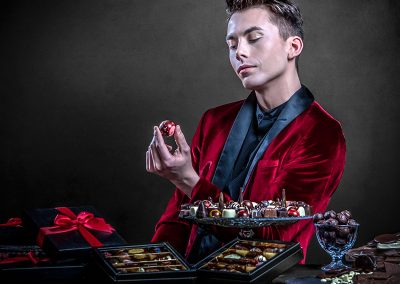 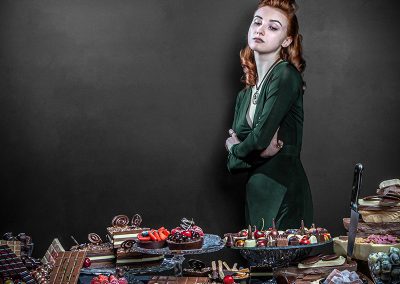 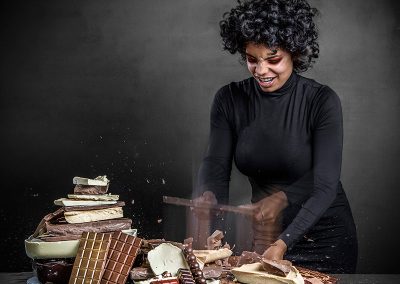 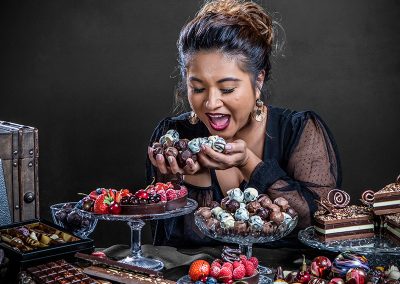 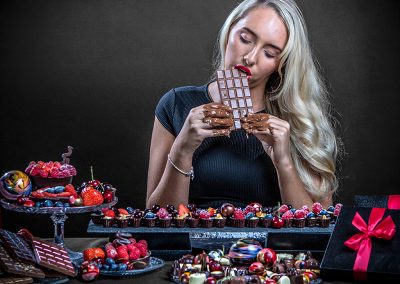 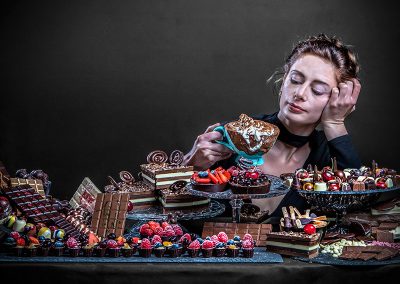 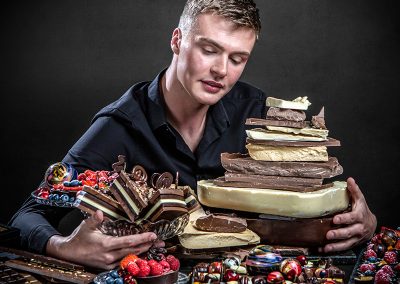 As with all projects like this, nothing ever runs entirely to plan. In the week running up to the shoot, there were a model or two who became unreliable and replacements needed to be found. Then the day before the shoot the makeup artist was panicking because the assistants she was going to use had both let her down.

After a call out to our own networks, Katie stepped in to be an assistant makeup artist, however, on the morning of the shoot, just a couple of hours before I was to pick up the keys to the hall, the lead makeup artist told us she couldn’t make it because she’d had some kind of accident and was in A&E at 4am. So Trae and a couple of the models went off to buy some makeup kits while Gillian and I began creating the set.

Despite the late start, everyone enthusiastically threw themselves into the day. We had a rough idea of who was going to represent each sin, but we were only onto the second model when we had to start swapping some of them round.

A point that a lot of people don’t realise about modelling is it’s only partly to do with what you look like. Just as important, if not more so, is the ability to project an emotion authentically into the camera, which is much harder than you might think.

When you are on a set, with lights around you, a photographer in front of you, and a whole bunch of other people getting hair and makeup done just a few feet away (who keep looking over to see what you’re up to), can you authentically display pride, or lust, or anger, without feeling extremely self conscious or bursting into laughter?

Knowing it was likely to be a very long day, we’d decided that we would get pizzas in for everyone by dinner time.

Station House Cafe & Cookery School in Kirkcudbright do a wonderful Sunday Evening Pizza special, so from about mid afternoon I was starting to look forward to it.

As we were approaching 6pm, we’d finished the individual sin shots and I was now going to have to change the lighting set up to accommodate 7 people on the set rather than one at a time. It seemed an ideal place to pause and go get the pizza.

However, the hairdressers and models decided they’d rather push on, complete the shoot and worry about food when they got home. Despite the protests of my stomach, I didn’t want a mutiny on my hands so I had to agree to their demands.

When I’d taken my final shot, Gillian said the chocolate used on the set couldn’t be sold again in the shop, so boxes were filled for everyone to tuck into and take home with them.

“I’ll just have one of those truffles while I dismantle the lighting,” I thought.

A long day’s intense shoot, no pizza, and an almost infinite amount of chocolate sitting there right in front of me.

This was the point my self control and will power decided to run off and hide.

To be honest, I don’t know how much chocolate I ate, but by the time I’d handed back the keys to the hall and arrived home, I wasn’t feeling the slightest bit hungry any more. In fact, I was feeling distinctly queasy.

Needless to say I didn’t sleep well that night and as for the next morning, well that’s where we came into this story.

The sin of gluttony was duly punished with the hangover from hell.

Gillian’s daughter, Holly, was tasked with shooting some behind-the-scenes video with my old camera, which I’ve used to give you a wee taste of what the day was like.