“So what we’re talking about is a hospital bed on the side of a long road, with a kid in it, a doctor and nurse by the side, a Blood Bikes courier with a helmet under one arm and a case of blood samples in the other, a Blood Bikes car behind them, half a dozen Blood Bikes in full livery, and as many volunteer bikers as we can find stretching off into the distance behind them.”

“That sounds about right. But to fit everything into the one shot, I think I’m going to need a bit of height. Any chance you can get hold of a cherry picker…?” 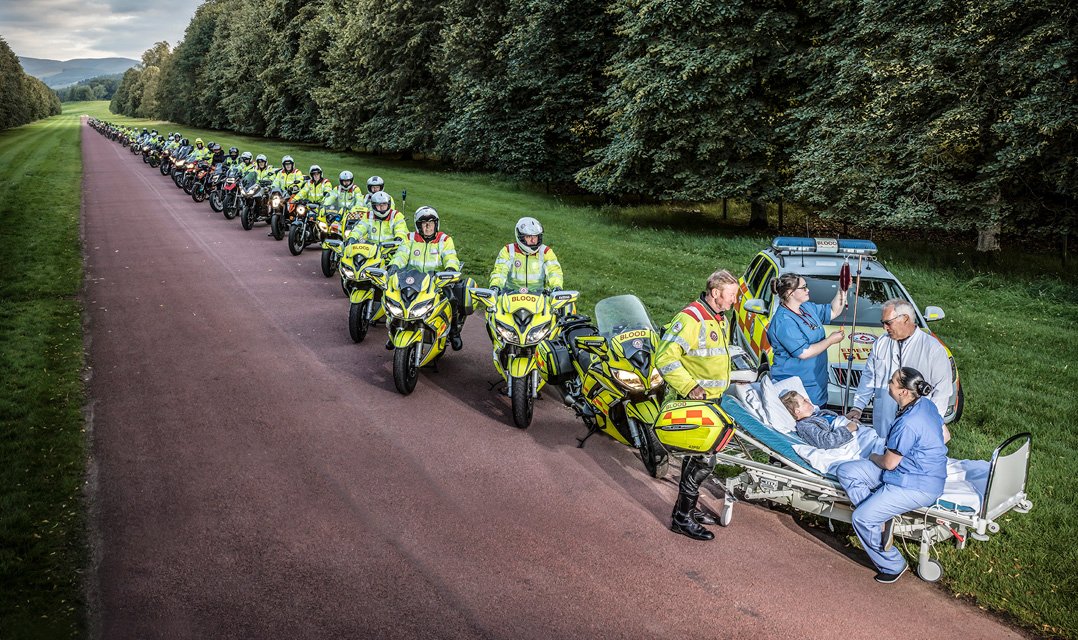 And so I found myself one (thankfully dry) evening, several feet above the ground, wearing a high-visibility vest, a safety helmet and my camera, shouting instructions to people who could then relay them to the assembled cast and crew of what was probably the largest photo shoot I’ve done to date.

Dumfries & Galloway Blood Bikes is a charitable organisation set up by local volunteers to deliver essential blood and urgent medical supplies, in and out of hours, between hospitals and healthcare sites in South West Scotland and sometimes beyond.

I met Vice Chair, Judith, a couple of years ago at the regional final of the Young Enterprise groups, when Castle Douglas High School won several of the awards. I’d helped them with their promotional photography (regular readers of my blog might remember the Mad Hatter’s Tea Party shoot – see It’s Not Just The Hatter That’s Mad), and one of their chosen charities was Dumfries & Galloway Blood Bikes.

At this point, the organisation had 2 or 3 official bikes decked out in the livery, and a couple of dozen volunteers, so any ideas I might have had for a promotional photo shoot for them would have been much smaller.

Time seemed to disappear and when we finally organised a meeting with the full committee over a year later, the charity had since won awards and grown in size considerably – now with half a dozen bikes, a couple of cars and many more volunteers.

Which allowed for a more ambitious project. 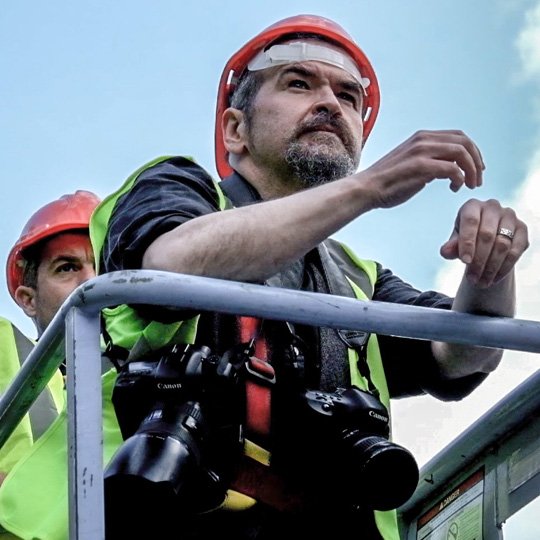 A lot of organisation was required, but when you have a team of focused, enthusiastic participants it means you can achieve so much more. Trips out to find a stretch of road we could use that wouldn’t be blocking public use eventually lead us to the long driveway leading up to Drumlanrig Castle, while in order to keep all the volunteers on the shoot happy, several members of DGBB made sure there was plenty of tea and cake available.

And they found me a cherry picker and someone to operate it.

Friend, and fellow photographer, Allan Wright, helped me out once again by taking some behind-the-scenes photos and video footage, while Jessica Lee – a model from previous shoots I’ve done – acted as an assistant and also grabbed a few video shots from her phone. Finally, Drew from Jst Roll Media brought his drone along to get some amazing aerial video scenes of the shoot.

Dumfries & Galloway Blood Bikes received the Queens Award for Voluntary Service – one of the highest awards a charity can get – which was presented to them by the Lord Lieutenant for Dumfries, Fiona Armstrong, at the new Dumfries & Galloway Royal Infirmary. They also used this occasion to unveil a large banner using the photo to promote the organisation. I was delighted how well the image worked.

Many thanks to everyone involved in making this photo happen.